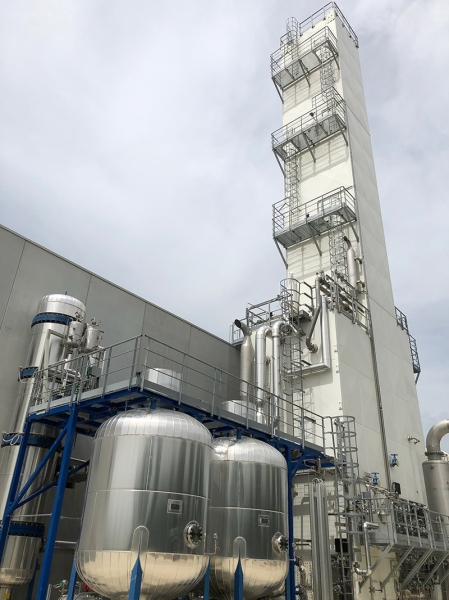 WhatsApp me if you interested
Cryogenic Air Separation Plant Cryogenic Nitrogen Generation Plant ASU PLANT
Sparco has always been developing and innovating the enrgy effeicnet process and design for the international market with compelte solution for the air processing , liquification and distillation . And aiming at the international markets General Contracting and Investment exportation. Sparco is one of the leading enterprises in gas producing industry in scientific research, design, consultation. service, integrated solutions, manufacture, marketing, completion of engineering project, equipment installation and commissioning etc.Sparco is capable of supplying Cryogenic Air Separation Plants all scales  from 100 nm3/h to 120,000nm3/h.

1. Pre-treatment, And Cooling
Pre-treatment of Air consists of removal of dirt using filtration devices. Then it is compressed and passed through several stages of intercoolers where the air is cooled in order to remove water vapour.
The temperature of the air has to be brought considerably down to the optimum temperatures suitable for downstream equipments hence often the air has to be further cooled with mechanical refrigeration cycle.
Much of the water vapour gets removed in this step.

2. Removal of Carbon Dioxide
It is important to remove Water vapour and Carbon Dioxide before transferring the air to downstream units because at low temperatures they will freeze and clog the equipments.
The pre-treated, compressed and cooled air is then passed through the molecular sieves. The molecular sieves are porous materials having very small sized pores; the size of the pores is in the dimension of the size of molecules. Molecules whose size is smaller than the pores will pass through the pores and molecules whose size is larger than the pores will not pass through. The materials can be selectively chosen to adsorb the Carbon Dioxide and the remaining Water vapour.

4. Distillation of Air
In order to separate Nitrogen usually only one distillation column is needed. If Nitrogen is required in very high degree of purity then two distillation columns are used.
In order to separate Oxygen usually two distillation columns are needed. The first column is maintained at high pressure and the second column is maintained at low pressure. The Oxygen is the bottom product in both the columns and Nitrogen is the top product.
The Argon’s boiling point is closer to that of Oxygen hence often in two column distillation process it stays with Oxygen due to which the purity of Oxygen gets reduced. In order to remove the Argon a side stream is drawn where the concentration of Argon is the highest. This Argon can then be further separated from Nitrogen and Oxygen to get Pure Argon. Process Discription:
Air enters the suction air filter and after being removed of dust and other mechanical contaminants in it, it is compressed to the pressure of 1.0MPa by air compressor. The Air getting out from the air compressor is cooled to 8 ℃ by the air-precooling system and separated condensing water in the subsequent water separator. Then it is taken into the molecular sieve adsorber for removing H2O, C2H2 and CO2. There are two molecular sieve adsorbers which operate on a staggered cycle, i.e. one vessel is adsorbing the contained impurities while the other is being reactivated by waste nitrogen from the rectifying column.Then the cleaned air is divided into two streams, one is taken into the rectifying column and cooled by the return waste nitrogen, oxygen，expander air through the main heat exchanger, and get into the lower column. In the lower column, air is separated pure nitrogen and oxygen-rich liquid air. In the top of lower column, the pure nitrogen is taken into the evaporator-condenser and condensed by oxygen-rich liquid air from the lower column. A part of the liquid nitrogen is fed to the lower column as reflux. The other part is draw out and enters storage tank as liquid nitrogen product. Another clean stream enters the main heat exchanger, and gets out from the middle and cold end of the main heat exchanger, and enters into the turbine expander to generate most refrigeration for need of the plant's operation. After the expanded air return to heat exchange. The waste nitrogen from the top of the evaporator-condenser is warmed up by inlet hot air; and part of it goes to the regeneration molecular sieve absorbers, and the other is vented.